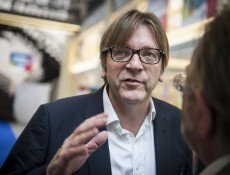 It’s no coincidence that we held our congress here in Budapest. Our presence here is a clear ‘no’ to the ‘illiberal state’ of Mr. Orban. Russia is an illiberal state. China is. Venezuela is. North-Korea is one. Let me be clear: there is no place for North-Korea’s Venezuela’s in Europe.

Let me tell you a story. Mr. Orban hasn’t always been like that. I met him for the first time 25 years ago. Right after the fall of the Berlin Wall. Here in a hotel in Budapest. I forgot the name, but what I do remember, is he was a convinced liberal in those days. Fidesz, the party he led then and still does, was nothing more then the student organisation of the liberal party, SDSZ, the party of so imminent intellectuals and writers as Imre Kertesz, Peter Esterhazy and my friend Georgy Konrad. Fidesz means literally, Fiatal Demokratak Szovetsege, Alliance of Young Democrats. I know that’s hard to believe. But in his first term as Prime Minister he reformed pensions, cut taxes, passed progressive legislation. He was a true liberal.

In 2002, he lost the elections. He went in opposition. And to regain power he renounced his princi-ples and he became a populist, replacing liberal values by a "dictatorship of the majority". The ma-jority has it always right. Even when human rights and democratic principles are trampled. Since he is back in power, he limited the freedom of religion, he curtailed the open internet, he under-mined the freedom of the press. Hungary today is in many ways an autocratic state, in which jour-nalists and NGOs can be raided at any time.

But Victor Orban is not only a problem for Hungary and for the Hungarians. He is also our problem, a European problem. Orban is Europe’s moral crisis. Instead of defending our European values, we tolerate him. We barely react. The European council doesn’t react at all. The European Com-mission not. The European Parliament not. Verbal protest, more than enough. Letters all over the place. But no action, no sanctions. Orban knows all too well, he has the protection of the EPP, the European People’s Party. The largest party in the hemicycle and at the same time the most spine-less.

To enter the European Union, you have to fulfil the Copenhagen criteria. Strict guidelines that de-fine the minimum standards. In terms of democracy, freedom of press, freedom of religion, respect for minorities. You name it. But once a country has entered the union, nobody looks back. It can do as it pleases. Like in Hungary. To tackle this double moral standard, we are here. It is this double standard that undermines Europe’s moral leadership. Because with what right, dear liberal friends, do we criticize Mr Putin or African dictators when we are not able to enforce democracy and the rule of law at home.

But this moral crisis is not our only weak spot. We have many others. Europe is today the only con-tinent in the world still struggling with the aftermath of the financial crisis, unable to overcome the economic crisis. Europe is also divided in the face of the ongoing refugee crisis. Paralysed institu-tionally because of a possible Brexit. And in the last few days, we are confronted with a security crisis, beyond precedent. A barbaric attack on Paris and the Paris youth. We’re all asking our-selves, how could this happen? In the heart of Europe, for the second time this year.

The harsh reality is, that terrorists know no borders while our 28 national security and intelligence agencies are separated by borders. The ultra-light approach of coordination is failing, time and again. Especially in counter terrorism. In 2004 in Madrid. In 2005 in London. In 2015 in Brussels and in Paris. Europe needs urgently to create a common capacity, a European Counter-terrorism agency. With autonomy. With a team. With equipment to gather intelligence, to conduct operations in all 28 member states. Covering the whole European territory. This can be done immediately, by pooling a significant part of our 28 national counter-terrorism units. National sovereignty doesn’t mean anything, if we cannot assure that all of us, are safe.

And the same counts for the ongoing refugee crisis. Sophie went to visit the camps here and her report is horrific. Refugees treated like criminals, not human beings. It’s even a more shameful fact that every year nearly four thousand people die in misery in the Mediterranean Sea. Also there, the basis of these painful tragedies is a lack of Europe. There is no common European border man-agement, no European asylum system, no European migration strategy, no equivalent of the Green cards as they exist in Canada and in the USA. In Europe there are 28, and with the so called blue card, even 29 migration regulations and 28 different interpretations of our international obligations towards asylum-seekers and refugees. No surprise that in such chaos Schengen comes under pressure. That one member state after the other starts to erect new borders with brick or with barb wire.

The refugee crisis is the ultimate proof of the necessity to develop a real common foreign policy and even to build a European defence community. Looking away from the problems in our neigh-bourhood, as we did in Syria, is no longer an option. It created a refugee crisis without precedent and a terrorist state Da’esh. If we want to live in peace, if we want to secure our freedom and secu-rity. We need to stick our neck out. We have to make a fundamental choice. Do we continue along the path that we have followed in recent years. Sticking our head in the sand. Like the conserva-tives and the socialists do. Pretending it isn’t all that bad. Swearing by the politics of small steps. The small steps that in our rapidly changing world equals stagnation, equals immobility. Always too little. Always too late. Further paving the way for all nationalists and populists in Europe who dream of only one thing and that is the breaking up of our continent, the return to the old national borders, the dominance of national identity. As if we have learned nothing from the past. As if we’ve forgot-ten completely that nationalism and populism and all their excesses have been responsible for 20 million deaths, slaughtered on the battlefield, killed in ethnic cleansing and pogroms, murdered in the Shoah.

Continuing on the path of the past, making nationals and populist always stronger, that’s the first choice we can make. But it’s not my choice and not your choice. I know that. Our choice is to change course drastically. ‘Another way for Europe’. Real and radical reforms. A total overhaul. We know what needs to be done:

But let there be no misunderstanding. These European solutions are not the birth of a European superstate. On the contrary. We need to get rid of the logic that everything needs to be decided by unanimity. That every decision needs to serve all 28 national interests. This perverted logic leads to big, obese European institutions with no real power, with no efficiency. Do we really need a Eu-ropean Commission of 28 ? We don’t even have enough portfolios and budget to give all 28 a full-time job . Do we really need 28 extra judges when the court only asked for 12? Do we need 40 different big European agencies spread around Europe? Is it not better to integrate them in the ex-isting administration. Less bureaucracy. Less white papers. Less green papers, more action.

The liberals will be the driving force. For ‘another way for Europe’. We are the ones who want change. Liberals in our heart. Centrists in our mind. Radicals in our choices.

I am optimistic about our strength in the future, our capacity to succeed. With new parties in Spain, in Greece, In Austria, in the Czech Republic and in Poland we have established a solid new base. With the new leadership of Christian Lindner in Germany and Tim Farron in the United Kingdom. And with our seven Prime Ministers in Slovenia, the Baltic states, de Scandinavian countries and the Benelux. We, together with our friends of the EDP we are the drive for change, we are the hope for Europe.